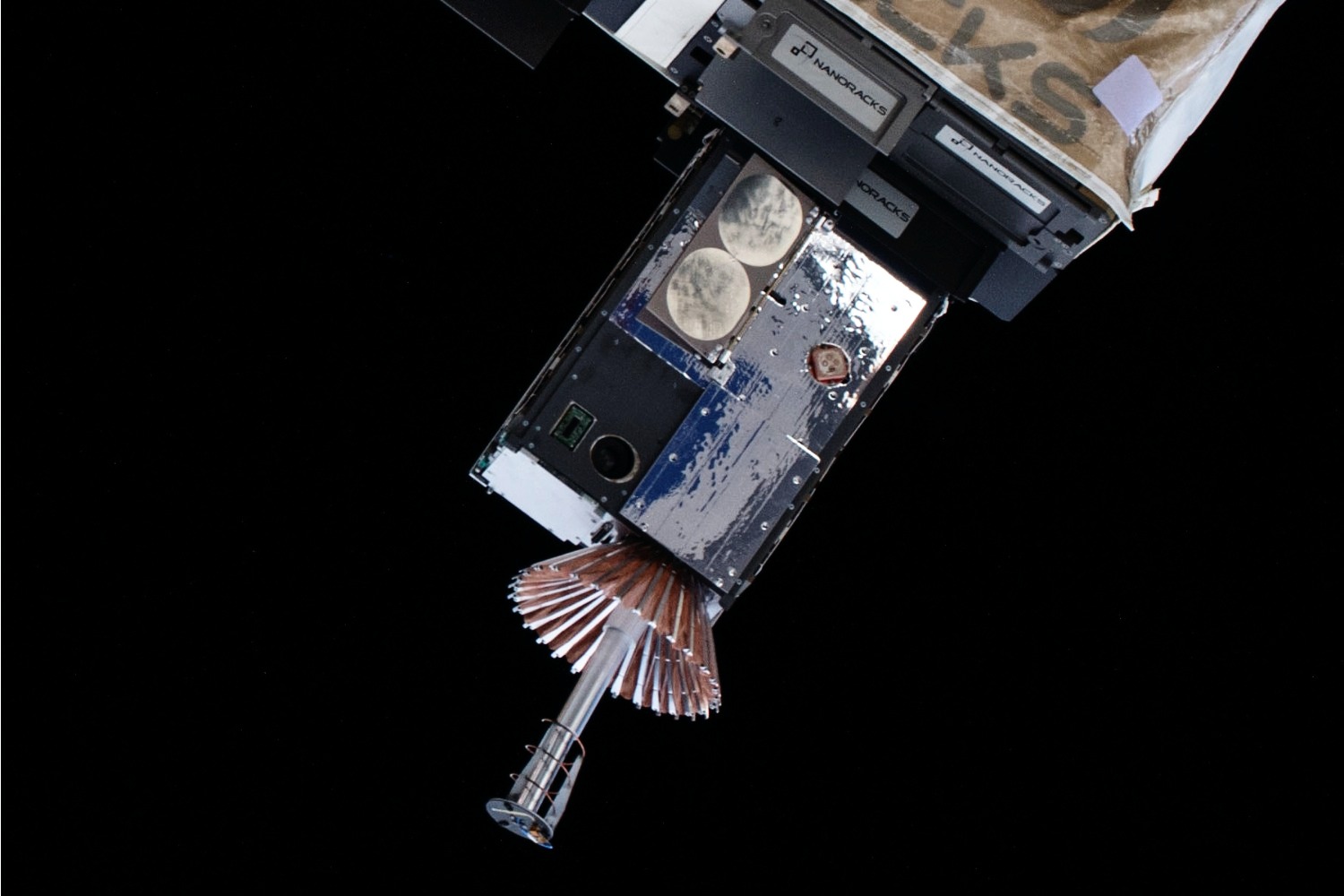 One great thing about Space is that it is inherently industry agnostic, and you’ll find space companies popping up everywhere from maritime to climate-tech to mobility. You can read more about this in our piece, The GPS Playbook, to learn just how vast this market really is. Investors in the New Space Age have plenty on their plate to choose from when it comes identifying promising investment opportunities, but part of that process is knowing what’s out there. These are some of the top space companies to watch when it comes to hitting milestones, and disruptive technology.

Hedron is a space tech company that is building the Fast Pixel network, a satellite relay network set to make real-time communication between satellites a possibility. This network will increase average data offload rates and provide a continuous low-latency link to the ground. Why is this important? Satellite imagery (satellite data as a whole, really) will experience a 6x increase in volume, and delivery of that imagery can make it anywhere on the planet in real time. As it stands, without this network, a satellite can take a picture, but has to hold on to it basically until it’s in range with the proper ground station in order to relay that image to the end-user. The opportunity here is immense. Hedron closed a $26.4M dollar deal with AF Ventures (the Air Force’s venture arm) to develop and launch six cubesats and two hosted payloads to begin establishing the Fast Pixel Network. With two successful technology demonstration cubesats launched, the space tech company plans to launch an additional satellite in late 2021, followed by six satellites across two payloads in 2022 and 2023.

LeoLabs will form the backbone of the new space race. Earlier we touched upon the lowered barriers to entry for getting into space, which is a great thing, but this also brings up a few new risks to keep in mind. With more objects entering LEO than ever before, LeoLabs is providing satellite operators, regulators, defense agencies, and insurance agencies the data necessary to track and monitor satellites, and avoid collisions in an increasingly crowded space. Their radar-powered Collision Avoidance system was awarded “Best Product” by Forbes in 2020, and was named one of the most innovative space tech companies of 2021 by FastCompany. The company is continuing to expand, and can construct their phase-array radars in under a year, with their next radar planned to be located in the Azores in Portugal, enabling them to track even more debris.

Our planet is changing, and in order to act, we need to know what’s going on. GHGSat is the global leading space tech company in high-resolution remote-sensing of greenhouse gas from space. They are the first private space company to offer such a service, and have pioneered the approach themselves.Through their leading-edge space and data technology, GHGSat is accelerating the decarbonization of our planet. As a testament to their technology, GHGSat has been able to track superemitters, leaking landfills, and mysterious, previously unknown leaks, all from space. Their data stack has enabled such impressive analysis, but their core sensing technology is found in their growing constellation of satellites, with their third satellite having been successfully launched in early 2021.

Akin is a space tech company building a third-wave AI that will form the brain of robotic assistants in orbital and interplanetary missions as humanity begins to explore space. Akin’s approach is not just another deep learning algorithm, rather, they offer a step-change improvement in the space through their understanding of chaos theory, and biologically-inspired methods of computation. The end product is an assistant that is deeply empathetic when it comes to understanding people, their goals, and the event-space/context it is operating in in order to solve problems, operate in never-before-seen environments, and make decisions autonomously. In space, Akin is working with teams at NASA’s JPL to develop crew AI that will support teams in space exploration. Back on Earth, Akin is set to begin delivering on home assistants that will be able to fill in key caretaker duties for people with disabilities.

ICON is tackling off-world construction for future exploration of the Moon. The endeavor, titled “Project Olympus”, is a collaboration between ICON and two award-winning architecture firms as partners for the project: BIG-Bjarke Ingels Group, and SEArch+ (Space Exploration Architecture). This space tech company’s technology focuses on 3D printing with materials that are found on the moon, setting them up to have a sustainable and versatile solution for off-world construction. Today, ICON has finished construction of several 3D printed homes, with homes in this development being ready for sale. On the lunar front, in Q1 2021, ICON’s proprietary 3D printing technology delivered the world’s first 3D-printed lunar launcher and landing pad at a Texas Military Department location just outside of Austin, TX.

Rocket Lab is a space tech company developing commercial rocket launchers to provide frequent satellite launch opportunities to Low Earth Orbit, removing barriers to commercial space. In March of 2021, Rocket Lab successfully launched their 19th Electron mission, and deployed six spacecraft to orbit for a range of government and commercial customers. Not without their challenges, Rocket Lab experienced an anomaly during their 20th launch (and second rocket-recovery mission). Space is tough for anyone, and those entering the space tech company industry should know that these things do happen, but what is important is the team behind these goals. With the know-how to make these visions a reality, anomalies such as this are a few steps back in a journey that is miles long. Rocket Lab has continued to gain traction, as they have been awarded a subcontract by the University of California Berkeley Space Sciences Laboratory to design two Phoon spacecraft for a scientific mission to Mars. With Rocket Lab’s early-march announcement of plans to go public through a SPAC merger, an investment opportunity may come sooner than expected.

Regrow is unlocking the profit potential of resilient agriculture, and making climate change reversal in the agricultural industry a greater possibility. This space tech company’s platform leverages remote sensing imagery to track, monitor, and manage crops, enabling farmers and agronomists to estimate crop performance, and diagnose sources of stress on crop production. Regrow is the result of a merger between FluroSat and Dagan, bringing together their solutions in agronomy and carbon monitoring.

Skywatch is the developer of a satellite data intelligence platform designed to make satellite data accessible to everyone. The space tech company’s platform discovers and has access to remote sensing datasets, and even helps users analyze such data, enabling users to monitor  the progress of crops, predict markets, track ships and airplanes, measure global warming, or create other fame-changing applications. In June 2021, in the venture capital space industry, Skywatch raised $17.2M in Series B funding, less than 17 months after its Series A round. While somewhat sooner than when the space tech company anticipated to raise next, the push was fueled by the increased demand for Skywatch’s TerraStream product, a data management and distribution platform. Customers have begun to use the platform to power their full operations, a goal Skywatch did not expect to hit until 2022 or 2023. This traction is exemplified through Skywatch’s revenue figures, being up 450% in the first half of 2021, when compared to the same period in 2020.

SpaceX is a company that needs little introduction. In short, they are the designer and manufacturer of rockets and spacecraft intended to realize the goal of making life multi-planetary. In 2008 they became the first private space tech company to send a liquid-fueled rocket into orbit, leading to them winning a NASA contract valued at over $1B to service the ISS. Since then, SpaceX has completed launch after launch, successfully delivering on a variety of missions, from cargo resupply, to deploying commercial payloads. On top of this, SpaceX has completed several Starlink missions in an effort to provide ubiquitous internet access to the world.

A big push we’ve observed in recent times is around connected vehicles and smart cities. As this sector becomes more innovative, the way we think about transportation and government revenue generation will have to adapt. To prepare governments to take advantage of these new streams of revenue, ClearRoad has developed an analytics platform to provide ubiquitous tolling services to streets everywhere. The company has run programs across the globe, delivering traditional tolling services, but also an alternative to the gas tax and a novel way to toll via congestion pricing. In a future where autonomous vehicles and new-mobility rule the roads, ClearRoad will be there to ensure municipalities can hold on to the revenue that will sustain themselves, and fund future mobility innovation.

Learn More
BACK TO ALL